Offshore Tax Exemption to be Reviewed 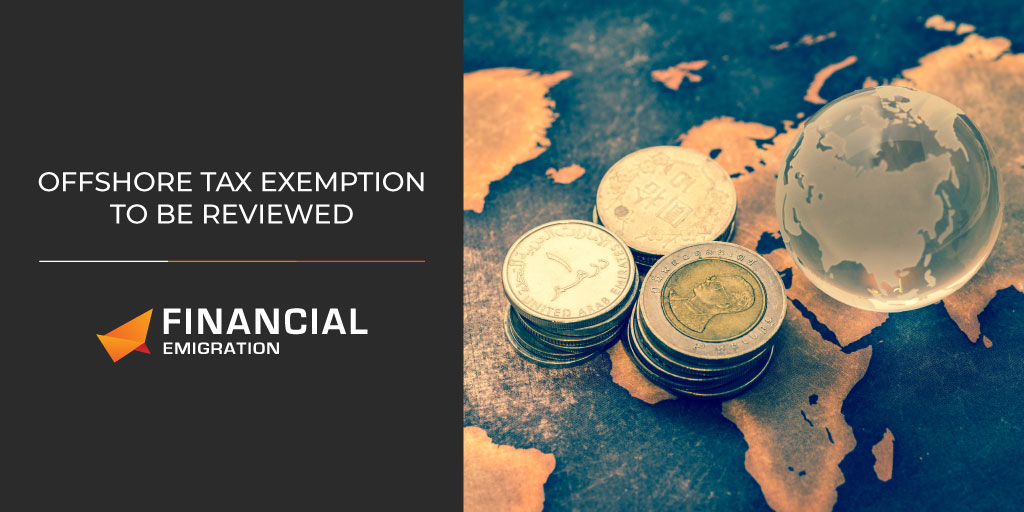 The controversial tax on income South Africans earn abroad and the R1 million exemption on it will be revisited during a special workshop between National Treasury and industry players in coming weeks.

Several organisations and individuals submitted proposals at the end of November, to be considered during next month’s Budget to address concerns raised about an amendment that the South African Revenue Service (Sars) introduced last year to provide for an exemption on the first R1m earned.

The date for the implementation of the tax is March 1, 2020.

The National Treasury held a workshop at the beginning of last month to discuss submissions for technical tax proposals for the 2019 Budget Review.

However, due to the “importance and extent” of the submissions, a workshop solely to address concerns about the tax on foreign income has been scheduled.

Tax Consulting South Africa says in its submission, on behalf of the Expatriate Petition Group and the South African Rewards Association, that it is “prudent” to deal with the issue in 2019 before it takes effect next year.

Jonty Leon, the legal manager at Financial Emigration, a division of Tax Consulting, says they wish to address the issue of “distorted inflation of taxable income of expatriates by including fringe benefits and allowances”.

“If these benefits are taken into consideration for purposes of the (exemption), we submit that it would result in a disproportionately high tax liability for a number of expatriates,” the November submission read.

The South African Institute of Tax Practitioners (SAIT) says in its submission that the R1m exemption provides little relief for South African employees who are working on assignments overseas.

Andries la Grange, the chairperson of SAIT’s personal tax work group, says SAIT appreciates the decision to introduce the exemption, but it would like to see it being tweaked.

He says it is evident that the capped exemption as it stands will provide little relief for employer-sponsored assignees, who are normally provided with a number of “assignment specific benefits”.

Other than a tax gross-up (when an employer increases the gross salary to account for the taxes to be withheld), which ensures that an assignee is not adversely affected or benefited by host-country tax rates, and cost-of-living allowances, the major fringe benefit is generally the provision of accommodation.

The current structure and amount of the exemption will leave employers and individuals materially worse off in situations where the transfer and transfer benefits result in a tax charge they would not have incurred had they not been transferred, La Grange says.

Tax Consulting says the cost-of-living differential also poses problems. The cost of housing in some jurisdictions, such as the United Arab Emirates, far exceeds that of South Africa.

“In rand terms, the expatriate may earn a very sizeable package, but this is not reflective of his actual buying power in the country where he works.”

Leon also referred to other benefits, such as security guards or a driver, which may be classified as a taxable benefit in a South African context.

“But where the employee is assigned to perform work in a remote location in Africa, this is almost rudimentary.”

“It is proposed that the exemption be pegged against a more stable foreign currency, especially considering the fact that the salary packages of the majority of individuals will be based in a foreign currency,” La Grange said in his submission.

Tax Consulting says, against the rand, the dollar and the Emirati dirham increased by about 13% between January and November last year and the English pound increased by more than 7%.

Over a decade, the exchange rate differences have been substantial; against the rand, the dollar rose 106%; against the pound, it rose 32.7%; and against the Emirati dirham, 106%. 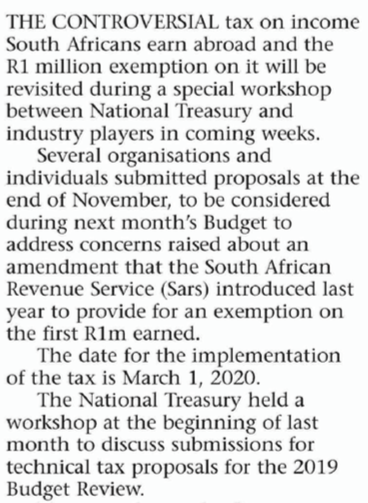 Countdown to the Commencement of the Amended South African Expatriate Tax L...

Tax Residency and Financial Emigration: Everyone is an Expert
Scroll to top