Following SARS’ media statement on 5 May 2020, it is clear that revenue collection is under immense pressure with an expected collection shortfall of between 15% – 20%. With the number of taxpayers able to contribute to the fiscus dwindling, SARS will have to look to untapped pools of potential revenue, meaning it will no longer shut its eyes to offshore trusts, foreign income streams and other assets held abroad.

One “untapped” revenue stream happens to be South Africans working abroad. With the new expat tax law taking effect on 1 March 2020, the first “expat tax” provisional tax payment is due in August 2020. Therefore, all expats who have not formalised their non-resident tax status with SARS are required to declare their worldwide income, which would include local income and foreign income received or accrued to them, in their provisional tax return. Those who have not done so previously or who plan on keeping this from SARS again should tread carefully.

The new arrow in SARS’ quiver

With a R500 billion COVID-19 rescue package weighing heavily on public finances, a recent downgrade to junk status by the credit ratings agency, Moody’s and a further increased revenue deficit for 2021 tax year of assessment, the announcement by the SARS Commissioner that SARS will henceforth rely heavily on third party information comes as no surprise.  Now more than ever, the government is in desperate need of tax revenue which is needed to provide relief to businesses and individuals. SARS can no longer let non-compliant taxpayer to operate unchecked.

In pursuit of revenue collection and ensuring that taxpayers are indeed compliant, SARS has designed a number of key changes, which includes compliance by providers of Third Party Information. As such, SARS would use information given by Third Party Providers to performs assessments of all taxpayers. These Third Party Providers include employers, banks, financial service companies who administer retirement fund and pension schemes and medical savings and insurance schemes.

It must be particularly noted that in terms of the Tax Administration Act read together with Notice 1  of 2016 published in the Government Gazette on 6 January 2016, there is an obligation  on these third parties to report taxpayer information electronically to SARS. In addition to the Tax Administration Act, the Foreign Account Tax Compliance Act (“FATCA”) as well as the Common Reporting Standards (“CRS”) require local as well as international financial institutions to report on financial information relating to foreign accounts to SARS.

Therefore, it is anticipated that SARS will ensure that they are taking advantage of all sources of information to ensure that all South African tax residents residing abroad and earning foreign income is accurately declaring such income. Consequently, if it is found by SARS that you have been understating your income, they may ascribe your behaviour to intentional tax evasion, in which case may very well be required to pay an understatement penalty (over and above tax payable) of 200% plus interest to SARS.

This should send alarm bells to expatriates, particularly those who have not disclosed their foreign earnings or their assets held abroad since leaving South Africa.

It is important to note that as a South African tax resident working abroad, you are legally required to submit tax returns to SARS every year and declare South African sourced income (if applicable) as well as declare your foreign earnings and thereafter claim the relevant deductions and/or  exemptions available to you.

Therefore, if you are not registered for tax  or fail to file returns and SARS finds that there is income going into your foreign/local bank account, for example, and such is not declared in your provisional tax return, you should expect grave and decisive consequences from a desperate and reenergized SARS. Caution should also be applied when you do declare your income but understate it so as to not include foreign earnings or any other income received which you may think is untraceable.

In either of the scenarios you would need not only be concerned about the financial ramifications, but the criminal sanctions as well. Not filing a return or failing to disclose your income when required to do so is a criminal offence under the Tax Administration Act, which is punishable by imprisonment.

It goes without saying that with the measures taken by SARS to ensure maximum tax collection, there is no longer a place to hide. Now is not the time to duck and dive and every taxpayer is encouraged to remain in the collector’s good books.

As the largest independent tax practice in South Africa, having also represented the Expatriate Petition Group in Parliament hereon and credited with the R1,25m exemption, we have deep experience in offering cost-effective solutions, but always keeping you safe from SARS and legal prosecution. 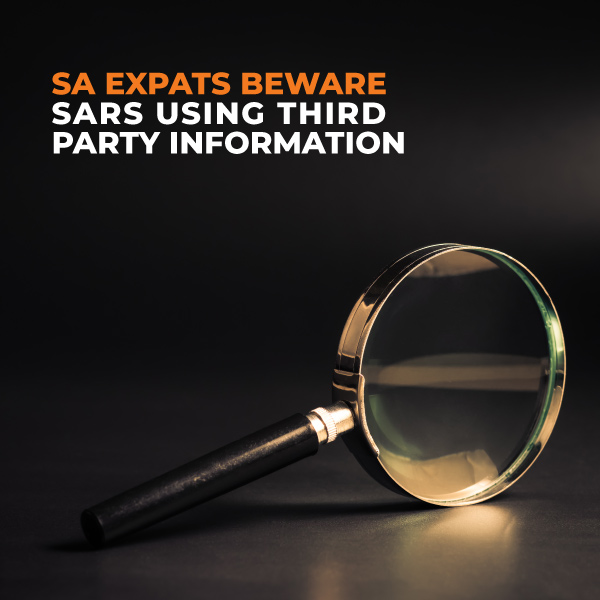 NEWS | THE ORGANISATION FOR ECONOMIC CO-OPERATION AND DEVELOPMENT IS CLEANING...
Scroll to top