South Africans working abroad are likely working for employers who aren’t registered for employees’ tax with SARS. In this case, they will be classified as provisional taxpayers and are obliged to submit a provisional tax return. As of 1 March 2020, provided they meet the requirements, only the first R1,25 million earned by a South African tax resident working abroad will be exempt from tax. Therefore, South African expatriates who remain tax residents and who either earn above the R1,25 million exemption or who do not qualify to claim the exemption should anticipate to have to pay their first provisional expat tax in August 2020” says Moloi.

Which expatriates are paying provisional tax, and why?

“In terms of the Fourth Schedule of the Income Tax Act, a provisional taxpayer is defined as any natural person who derives income, other than remuneration or a natural person who derives remuneration from an employer who is not registered for employees’ tax. Therefore, despite only earning a foreign employment income, where the employer of an expatriate is not registered for employees’ tax, the expatriate will be regarded as a provisional taxpayer and will be liable to submit a provisional tax return and make payment accordingly to SARS” says Moloi.

The benefit of provisional tax is the ability to plan and save.

Provisional tax is not a separate tax that is different to income tax. It is merely a system that requires taxpayers to provide for their final tax liability in advance.

Tax Consulting South Africa offers an Expatriate Calculation Service that helps provisional taxpayers ensure they are exercising due diligence on their tax affairs. “The Calculation Service takes everything from fringe benefits and exchange rates to bonuses and tax credits into account to help expatriates plan and save for any tax liabilities they may have,” concludes Moloi. 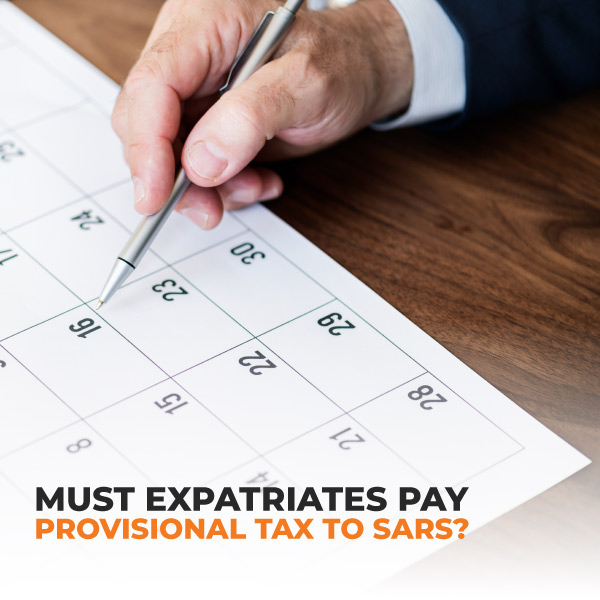