The proposed amendment is directed at paragraph 30 of the Fourth Schedule to the Income Tax Act, section 58 of the Value-Added Tax Act and section 234 of the Tax Administration Act. All of these provisions cater for offences committed by taxpayers. More importantly, all of them provide that a taxpayer will be guilty of a criminal offence if they “wilfully and without just cause” commit certain acts or fail to meet certain obligations.

The rationale behind the proposal is that our law makes provision for two types of culpability i.e. intention and negligence. Reference to “wilful” acts means that negligent conduct, which is measured objectively against what a reasonable person would have done in the circumstances, is excluded from the ambit of the offences referred to in these sections.

National Treasury and SARS appears to be fed-up with excuses and wants to remove the hurdle that they must prove that the taxpayer’s conduct was “wilful and without just cause”. National Treasury is on record that the NPA is of the view that this substantially undermines the ability of SARS to ensure compliance and hampers the NPA’s ability to prove the elements of the crime.

For this reason, it is proposed to remove this common wording, so SARS and the NPA can measure taxpayers’ conduct against the standard of reasonableness and hold them criminally accountable if they fail to observe it.

Make no mistake, this change signals a violent change in policy, which may stem from SARS’ much anticipated new hard-line stance on tax non-compliance, which includes calling out tax dodgers publicly.

The proposed amendment has already invited some impassioned ranting and will no doubt be the subject of some heated debate in Parliament. But we do not expect National Treasury and SARS to accept any unjustified criticism. They have been called out to get tax criminals behind bars and this law amendment will give them the tools; perhaps an overstep, perhaps not. On these items we generally have found National Treasury and SARS to be well researched and they will presumably be ready with international examples of other tax jurisdictions where similar measures have been implemented successfully.

Public comment on the new tax bills are due on 31 August 2020 and this amendment will probably invite the most comments from members of the public and industry stakeholders. Those who feel it is extremely unfair that being forgetful on your taxes can now make you subject to a 2-year prison sentence, to remedy your forgetfulness; can write to SARS at acollins@sars.gov.za or National Treasury at 2020AnnexCProp@treasury.gov.za.

What Does This Mean for Taxpayers?

The legislative process must still take its course, but taxpayers should err on the side of the caution and proceed as if the change will become law eventually. This will mean that ignorance or neglecting one’s tax affairs may effectively result in criminal sanction.

Critically, where you have a blemished compliance history, your transgressions may have more serious consequences if uncovered after the new law change. The only sure-fire way to avoid this is to disclose acts of non-compliance by filing an application under SARS’ Voluntary Disclosure Programme, which provides full amnesty from criminal prosecution.

Either way, the law change may serve as a cue for taxpayers that taking ownership of their tax affairs now becomes even more important. While there have been many calls for getting tax criminals behind bars, many would argue this may be a step too far. Whether those who criticize the change will have the courage of conviction to take this to the Constitutional Court, remains to be seen. However, for the standard South African, the simple position of safety is to make sure your taxes are fully compliant and not to take risks. Where you are unsure, get a tax diagnostic done. 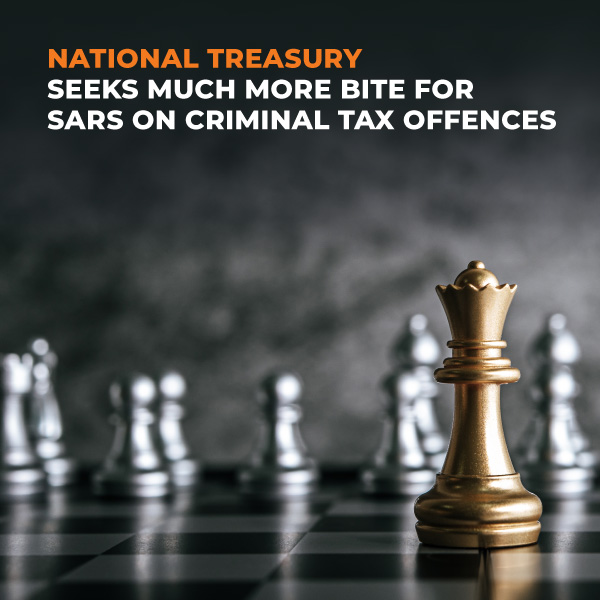