UNDER WHICH CIRCUMSTANCES ARE YOU ALLOWED TO WITHDRAW YOUR RETIREMENT ANNUITY?

It is worth noting that even where an individual has reached the age of 55, they will still not be able to encash the full amount. On the other hand, currently, where an individual financially emigrates, he/she is able to encash the full amount at conclusion of their financial emigration. However, based on the 2020 Budget Speech, the ability to withdraw from a retirement annuity, may be restricted.

This is owing to the fact that the National Treasury announced that they would be phasing out the SARB process of financial emigration as of 1 March 2021. Due to these amendments, the ability of individuals being able to withdraw their retirement annuity upon emigration would be reviewed.

It was announced that as of 1 March 2021, the SARB process of financial emigration will involve a “more stringent verification process” which could trigger “risk management tests”. Consequently, there are suspicions that it may be more difficult, if possible at all, for individuals to withdraw their retirement annuity upon emigration post 1 March 2021.

What process must be followed to have an RA withdrawn for emigration?

Financial emigration experts are able to assist individuals who wish to financially emigrate and withdraw from their retirement annuities to follow correct steps and procedures.

What kind of penalties or taxes will apply to this?

Financial emigration does not result in early encashment penalties where an individual elects to withdraw from their retirement annuity upon emigration. However, it must be noted that lump sum benefits received would still be subject to tax in South Africa.

There are two different tax tables that are applied to lump sum benefits received of which one being for lump sums received from a pension, pension preservation, provident, provident preservation or retirement annuity fund on withdrawal and the other being for receipt of such lump sums on death, retirement or termination of employment.

The withdrawal from a retirement annuity upon emigration falls within the first mentioned tax tables. For the 2020 tax year of assessment, the first R25,000.00 of the withdrawn amount would be exempt from tax. Thereafter, any amounts received in excess of R25,000.00 will be taxed on a progressive scale starting at 18%. It is worthy to note that the tax tables may be changed every year therefore tax rates and consequences may differ on a year to year basis.

Does the money get paid out straight to a bank account in the country you’re emigrating to or can it be paid out to a local SA bank account?

What else should someone keep in mind regarding this?

What the future holds for the financial emigration process is uncertain at this stage, However, with the seemingly more onerous amendments to be implemented to the SARB process of financial emigration, South Africans working and living abroad who have a permanent intention to remain outside of South Africa are strongly encouraged to formalise their fiscal status as soon as possible.

Failing to do so may possibly result in them either no longer being able to benefit from withdrawing from the retirement annuities prior to reaching the age of 55, or it could mean that they would need to face a “ more stringent verification process” and a “risk assessment test” before they can do so. 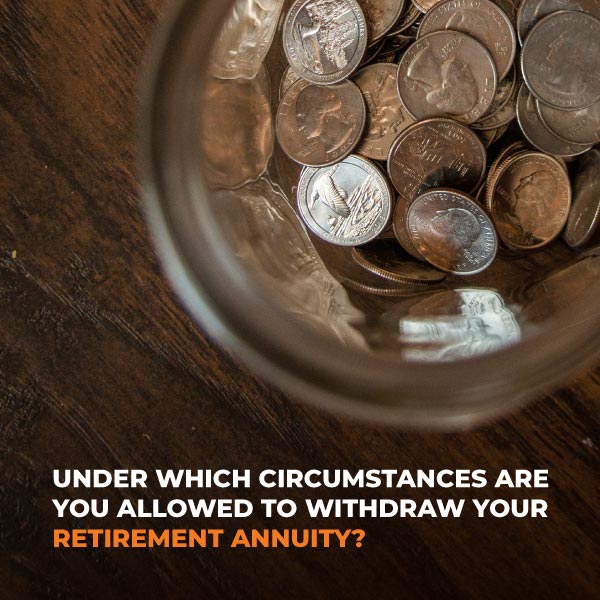 NEWS | SOUTH AFRICANS WORKING ABROAD: MUST YOU SUBMIT A TAX RETURN TO SARS?