I WOULD LIKE TO EMIGRATE USING MY PROVIDENT FUND.

HOW MUCH WILL I BE TAXED?

I will resign from my current company in four months. My provident fund value is currently sitting at R201 150. I would like to take this money and emigrate overseas. Will I still be taxed 18% after the first free R22 500?

Please be advised that by the time that you resign in four months’ time (i.e. April 2020) South Africa would be in the 2021 tax year of assessment. That means that the tax table upon which your tax liability would be determined may be changed.

However, if we use the tax tables for the 2020 tax year of assessment as an example, the first R25 000.00 of the amount withdrawn would be exempt. Thereafter, the remainder of the amount would be subject to tax at a rate of 18%. It is worthy to note that the rate at which retirement interests are taxed will increase depending on which tax bracket the interest would fall.

It is important to be aware that lump sum benefits are taxed under special tax tables, which can be found in the Rates and Monetary Amounts Act. The nature of the amount and the event that triggers the payment thereof determine which table must be applied.

In terms of retirement lump sums, there are two different tables, one being for lump sums received from a pension, pension preservation, provident, provident preservation or retirement annuity fund on withdrawal and the other being for receipt of such lump sums on death, retirement or termination of employment. The latter table provides for more favourable tax treatment.

The withdrawal upon emigration falls within the first category, which means that the amount received from the provident fund will only be exempt up until the first R25 000. Thereafter, the balance will be taxed progressively in terms of the table, starting at 18% after the first R25 000.

The emigration does not mean the amount will be taxed differently. Emigration is simply the event that triggers the withdrawal. 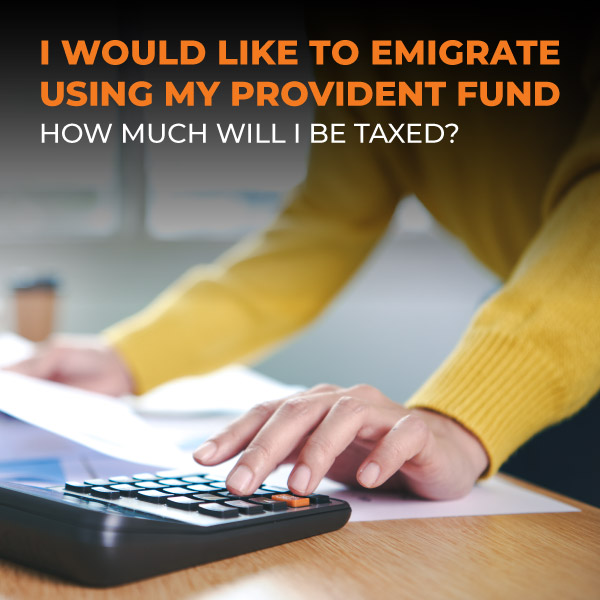