SARS IS NOW ISSUING LETTERS CONFIRMING NON-RESIDENCY – WHAT DOES THIS MEAN FOR EXPATS?

One of the challenges faced by taxpayers who have left South Africa and ceased their South African tax residency has been obtaining objective confirmation of the fact.

Ordinarily, this dilemma would require a taxpayer to maintain a preponderance of objective evidence to demonstrate the fact that they are non-resident, and this evidence would generally include obtaining a TCS Pin from SARS that indicates that they have emigrated from South Africa.

However, a TCS Pin is only valid for one year following the date of issuance. As such, this was not generally considered to be sufficient, in the longer term, of the fact that SARS has formally and indefinitely accepted the status of a taxpayer as being a non-resident for tax purposes.

In response to these challenges, SARS previously mentioned that it would begin to issue certificates formally confirming the change in status of expatriates who ceased their South African tax residency. These would be issued by SARS, to ensure that those taxpayers are able to adequately meet their international tax compliance obligations. It now appears that SARS has met this commitment.

This means that a taxpayer who permanently left South Africa and ceased their tax residency in South Africa is now able to apply for a “Notice of Non-Resident Tax Status” from SARS, which confirms that taxpayer’s change in status from being a resident to a non-resident.

Uniquely, the notice in its current form provides the specific date on which the taxpayer ceased to be a tax resident of South Africa. This is, furthermore, stamped by SARS on the issuance date. These details could prove massively useful for taxpayers, especially when seeking to claim relief from tax in South Africa that is only available to non-residents.

This document would further serve as a non-resident taxpayer’s first line of defence after ceasing their South African tax residency, upon any later enquiry by SARS into their residency – but more specifically – it would be their “shield and armour” against any foreseeable tax liability on their non-South African sourced income moving forward.

Whereas it remains to be seen whether SARS will keep to their further commitment of introducing a new portal for the issuance of non-residency certificates, the issuance of these notices is a definite step in the right direction and a hopeful sign of more progress to come. We look forward to seeing more positive development by SARS in this area. 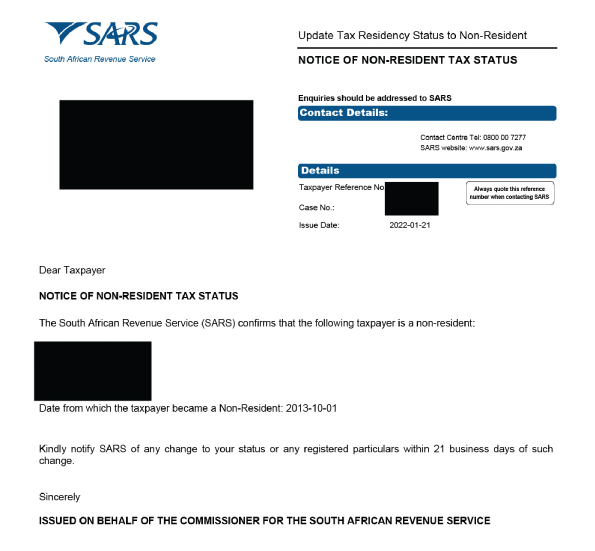 REGISTER FOR A WEBINAR ON THIS TOPIC

Expatriate Tax: A Definitive Textbook That Unpacks The Complexities Of Expatriate...