MARCH 2021 A WATERSHED FOR RETIREMENT FUNDS IN SOUTH AFRICA

5 THINGS YOU NEED TO KNOW

Most are focussed on the annuitisation rules that have been pending since 1 March 2015, otherwise known as ‘T-day’.

While these reforms are significant, retirement fund members need to understand them in the grand scheme of things.

Back in 2013, the then minister of finance, Pravin Gordhan, tabled proposals directed at the governance, preservation, annuitisation and harmonisation of retirement funds.

Initially, T-day was earmarked for 1 March 2015, but was postponed as a result of ongoing “consultations” with stakeholders.

Many will be aware that from 1 March 2021, members of retirement funds will be subject to the annuitisation rules, which means that they will only be able to withdraw one-third of the value of their retirement fund by way of a lump sum, where the balance must be withdrawn as an annuity.

The annuitisation rules do not apply where the retirement interest does not exceed R247,500, or to amounts contributed on or after 1 March 2021.

Currently, members of retirement funds can immediately access their funds in a preservation or retirement annuity fund when they emigrate from South Africa, if such emigration is recognised by the SARB.

In terms of the latest Taxation Laws Amendment Bill, from 1 March 2021, withdrawal will only be permitted if the member can prove they have been non-resident for tax purposes for an uninterrupted period of three years.

This means an effective three-year lock-in of retirement funds from the effective date.

Importantly, for those who plan on leaving in the near future, in terms of National Treasury’s response to public comments on the amendment, members will be allowed to withdraw their funds under the current dispensation if they file a complete application before 1 March 2021.

The ongoing whispers of “prescribed assets”, where the government effectively wants to unlock retirement funding for investment in government projects have made South Africans very anxious. The government’s main hurdle in implementing this policy is Regulation 28 under the Pension Funds Act No. 24 of 1956.

Regulation 28 would have to be amended to effect this policy, as it requires a fund to act in the best interest of its members.

The ANC’s stance on this has not been consistent, but the latest hereon can be drawn from the Medium Term Budget Policy Statement where the minister of finance said that “government has initiated a process to review Regulation 28 to make it easier for retirement funds to increase investment in infrastructure – should their board of trustees opt to do so.”

He further noted that a draft gazette will be published in due course for public comment, so it seems that this policy will be implemented in some shape or form.

Rules that remain unchanged (for now)

It is important to understand that the annuitisation rules are largely directed at aligning retirement funds with respect to annuitisation; but this should not be conflated with the idea of compulsory preservation.

For example, currently, you are permitted to take your full withdrawal benefits from your pension fund in cash upon termination of your employment. Some may understand the new rules to mean that this would no longer be possible, but this is not the case – this rule remains intact – for now.

Further to his comments on Regulation 28, the minister of finance also said that “Government will present legislation next year to allow for limited pre-retirement withdrawals under certain circumstances linked to mandatory preservation requirements.”

National Treasury mentioned this policy will allow access to retirement funds during times of crisis, but mandatory preservation, which was part of the agenda initially, looks like it will be part of the equation.

While changes are implemented progressively, fund members should keep their ears to the ground, as the government’s policy on retirement funds appears to be a moving target. 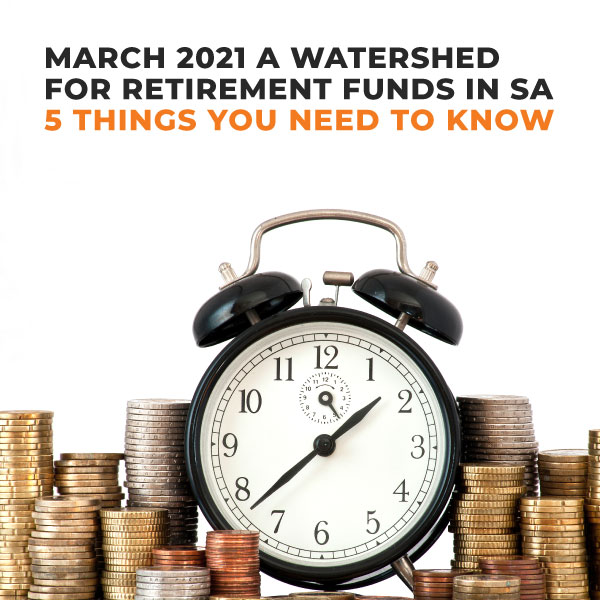