FINANCIAL EMIGRATION 2021: WHERE TO NOW?

South Africans who have emigrated or plan to permanently leave South Africa have until 28 February 2021, to effect Financial Emigration in its current form, or be faced with a more stringent process. National Treasury (“Treasury”) has laid down the new law and made it clear – the consequence otherwise is your retirement money will be locked in for three years, you are not allowed to touch it, and best apply it to your personal circumstances.

On Tuesday 13 October 2020 in Parliament, Treasury and SARS presented to the Standing Committee on Finance on a number of proposed amendments to legislation, which amongst others, would directly affect South Africans who have already moved abroad, or are planning on moving abroad. The feedback to stakeholders, specifically around the withdrawal of retirement funds upon financial emigration, was certainly one which was foreseen after it was proposed in the draft Taxation Laws Amendment Bill (“TLAB”) in July 2020.

These changes are outlined in more detail below.

Treasury confirmed that it plans to change rules around financial emigration and the ability to withdraw one’s retirement funds, upon the conclusion thereof, replacing it with a new three-year lock-in period. The change is set to be introduced from 1 March 2021.

With this, many had decided to withdraw their retirement funds from South Africa and invest in a more stable economy.

In its response, Treasury said that the three-year rule is a mechanism to ensure that there is a sufficient lapse of time for all emigration processes to have been completed with certainty, without affecting such workers whose residence status changes for reasons other than emigration.

“The current system of financial emigration imposes lot of strictures, not least its requirement that individuals close bank accounts and credit cards and repatriate funds that are taken out above the limits if return to the country before five years has elapsed.”

“The envisaged system as a whole will have much lower compliance burdens overall for those looking to move abroad, and therefore it is not useful to focus on the three-year requirement in isolation of the overall policy change.”

“Modernisation” or Something More Sinister

According to Leon, the comments from Treasury have been that the system is being “modernised”. A term which has yet to be fleshed out by Treasury, with only simple explanations that provide no sense of understanding, such as, “One of the main objectives of the reform is to modernise the capital flow oversight system in a manner that balances the benefits and risks…”.

With the various submissions made by stakeholders on the issues foreseen with the proposed changes, Treasury provided little feedback on the important issues raised, often providing no explanation but for a one sentence response. “Government’s unwillingness to budge on the lock-in, incites fears of the looming worries of taxpayer’s retirement funds falling into the hands of government to fund social infrastructure in SA, changes to Regulation 28 and perhaps even an easy target for higher taxes on pensions or a wealth tax”, warns Leon.

This concern was brought up by National Treasury previously, where it was denied that the so-called “modernisation” and lock-in had any link to this possibility. However, with the unwavering determination to lock-in retirement funds from 1 March 2021, this becomes less believable. There is clearly a massive downside to anyone having their retirement funding captured in a system; so the question remains unanswered what corresponding benefit National Treasury plans to achieve by keeping retirement under state control.

The Time is Now

Treasury’s announcement appears to be the final warning – South Africans leaving SA have until 28 February 2021 to financially emigrate under the current dispensation, and thereafter to withdraw their retirement funds, before it is locked in for 3 years minimum.

“We are heading into unchartered territory, with a complete transformation of the financial emigration process – those that have been left behind will undoubtedly have tougher terrain to navigate come 1 March 2021”, reiterates Leon. 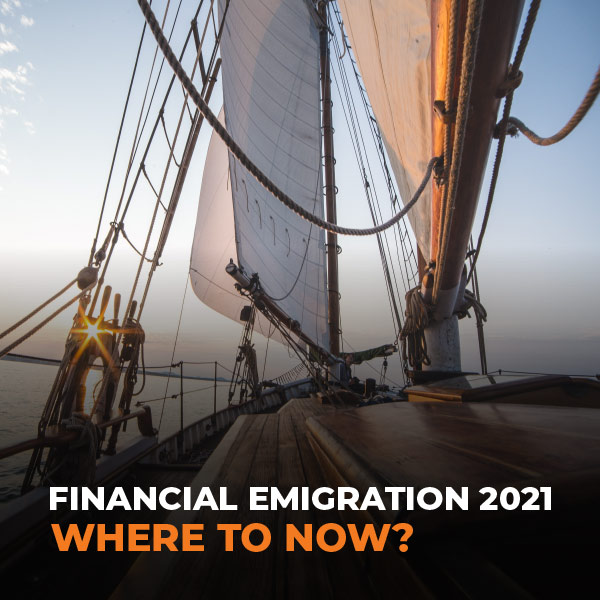 Learn More About The New Financial Emigration
Scroll to top
Visit the Government Portal for the latest updates on COVID-19.
+